Extra:  “Doing the absolute damn most. For no reason.” (Urban Dictionary)

Not already established but henceforth declared to be true: that’s Alder Room.

I know, I know! Alder Room appears to be the absolute all time opposite of extra. The epitome of simplicity and minimalism. The height of super cool but not TOO cool modern everything.  But “doing the absolute damn most”??? That is EXACTLY what Ben Staley and his peeps are doing over there. And it’s unbefreakinglievable, my friends.

ALSO. We chose the Alder Room for my birthday dinner celebration and we got the WHOLE PLACE TO OURSELVES. Now, that’s customer service. 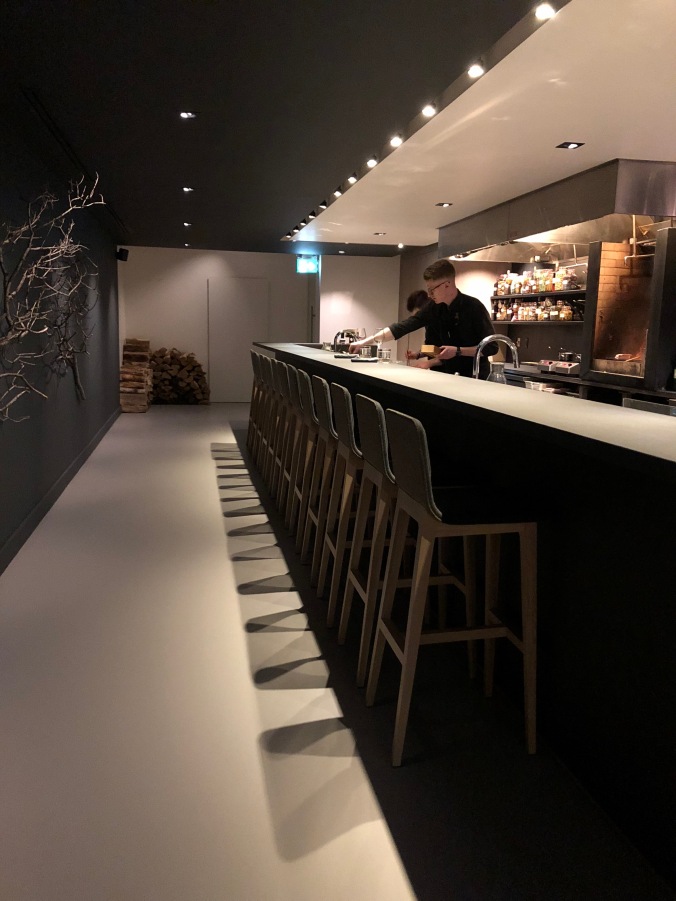 Ok, actually the other people just couldn’t make it. BUT still.

Since we were the only 2, we got a tour of the basement and its connecting secret underground caverns where Ben keeps a subterranean organic garden as well as a small hobby farm, and also got adorbs chef’s hats that say “I Ate at Alder Room and All I Got Was This Lousy Chef’s Hat.”

Or not. But we did get to learn a tonne about the restaurant and its devotion to local ingredients and how Ben has only missed one service (!) since they’ve been open and about Radiohead as soundtrack for life and about tattoos and Scottish heritage and Rhodes Scholars and knives that don’t work so well when you use them upside down!

We also did the wine pairing, and started off with a cider from Normandy that smelled just a leeeetle bit like manure, but a very delicious manure! Fun fact: in the industry, this aroma is not, in fact, referred to as “manure”, but as “barnyard”. Also, Normandy ciders just like to smell this way. And good for them, because turns out, “barnyard” = “très bon”!

So, you start off in the living room, (LOVE), with some small delights that at first, made the ol’ portion loving husband panic. However, he was quick to note that these delights were in fact so delightful, that size did, in fact, not matter.

Endive and seaweed – so refreshing and I kept it on hand to bite into between the other heavier tastes.

Check out the super cool presentation of the quail egg rolled in vegetable ash. And yes, it was delicious!

Fried sunchoke skin with a burnt cream that was sneakily burrowed into the hollow underside.

Caramelized cabbage in a bed of non-caramelized non-cabbage leaves. Robert looooved this but all I have to say is, if you have any challenges with visual perception and being able to distinguish between food and not food, be careful! Glad to help out, Robert.😬

We started with a super yummy scallop and cucumber dish with beautiful thin slices of kohlrabi. 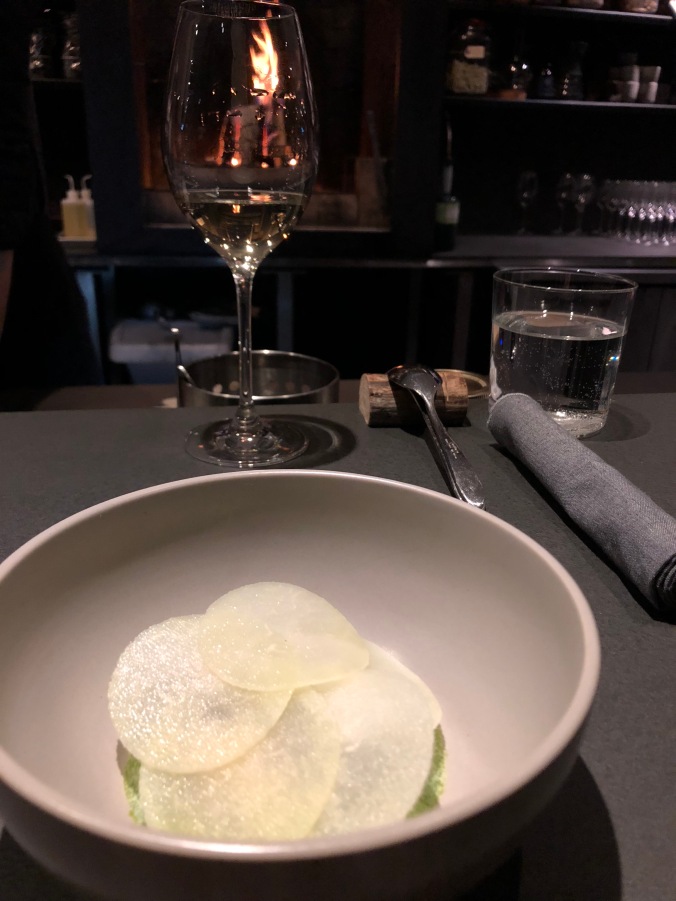 Robert stated, “Hey, you can’t see anything in that picture! Here, let me destroy mine and then you can see what lies beneath.” Ok, Robert.

Now it looks like some kind of animé creature with cucumbers for eyes and kohlrabi for hair, but, thank you for your undying dedication to truth and transparency, dearest husband!

Agh. This was so good. The beetroot was sooooo chewy in a good way and the pickled blueberries and hay cream were perfect with it. Did you know that Ben started pickling and fermenting and preserving stuff 2 years before the restaurant even opened? HELLO PEOPLE THIS IS DEVOTION.

By now, I was actually starting to feel a little full – which mystified the Portion King. But I gamely took on the pork belly with yellow pea miso and onion and I am SO glad I did because YUM. This isn’t your creepy omnipresent pork belly that can now be found in almost every restaurant. I’m pretty sure McDonald’s is going to come out with a Filet O’ Belly soon, but THIS people, THIS was pork belly done right. DONE RIGHT.

What?? Another substantial meat course?

By this time, Robert was grinning ear to ear in portion bliss. And it really was bliss. Dry-aged beef, black garlic and ramp.

Moving on to a rice pudding with sake kasu and wild ginger.

I also could not finish this.

After all of this manna from heaven, plus a lot of talking wherein Robert and I forgot that  these guys have a job to do and another seating at 7:30 and lots to prepare and we need to actually chew more and yak less, we moved back to the aforementioned living room for some sweets.

This box of sweets is so beautifully done, I started to feel a little frumpy myself. You start on the right with the black trumpet mushroom shortbread, then on to the beets cooked in carrot cordial, followed by burnt honey caramel, and finally, black garlic and birch syrup.

I know this is getting repetitive, but YUM, ok?

We bid farewell as two very contented people, thanks to Alder Room. 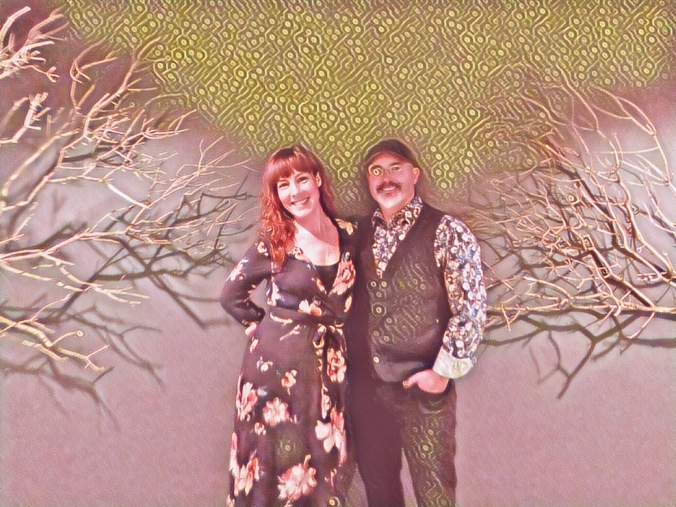 And, as evidenced by this doctored up photo in which Robert sports a golden swirly eye, we bid farewell as two very EXTRA extra people, thanks to my inability to do anything but the

In spite of your lack of souvenir chef’s hats, we love you, Alder Room! 😬

In hindsight, I’m not sure I would have selected the furry pink beast as my coat of choice for Baijiu.

Add to that the pink ombre tassel earrings and I am reallllly on the far side of the EXTRAmeter.

What the heck, who am I kidding? I’m extra and I like it.

And, hey! I found out Baijiu is kind of extra and I like that too!

First thing, as we walked up the stairs, there was a cloud of hip and beautiful people floating at the pinnacle, including a local yogi celeb whom I ardently admire! Felt v. frumpy/old all of the sudden.

Fortunately, once inside, it was clear that Baijiu does not discriminate against regular or even extra types. All are welcome!

It’s pretty cool at Baijiu. We didn’t want to sit at one of the tables, so we bellied up to the bar. 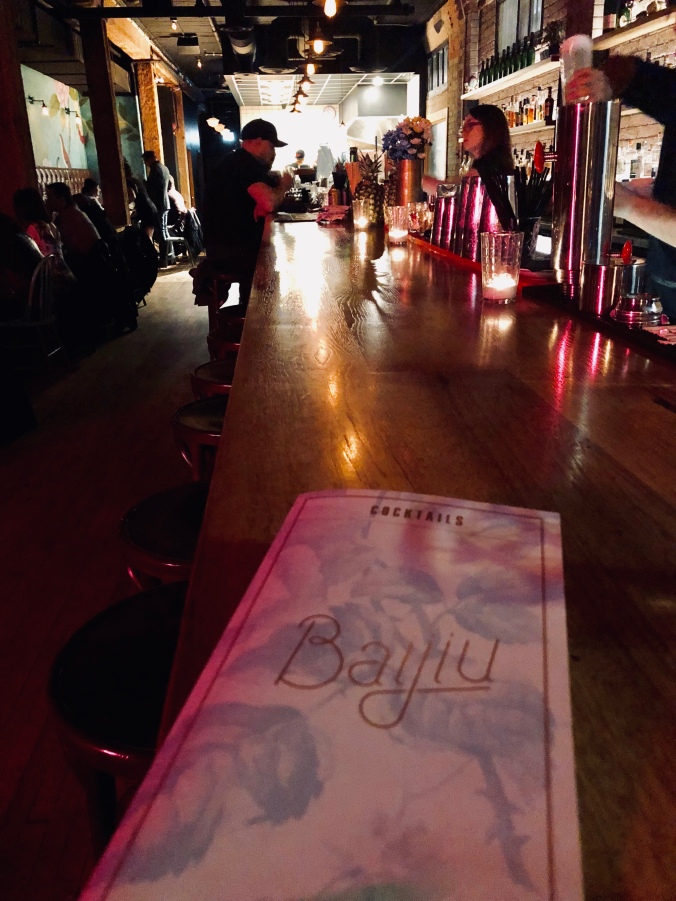 Also, we sat right by the DJ guy, and it was very festive to watch him do his thing. 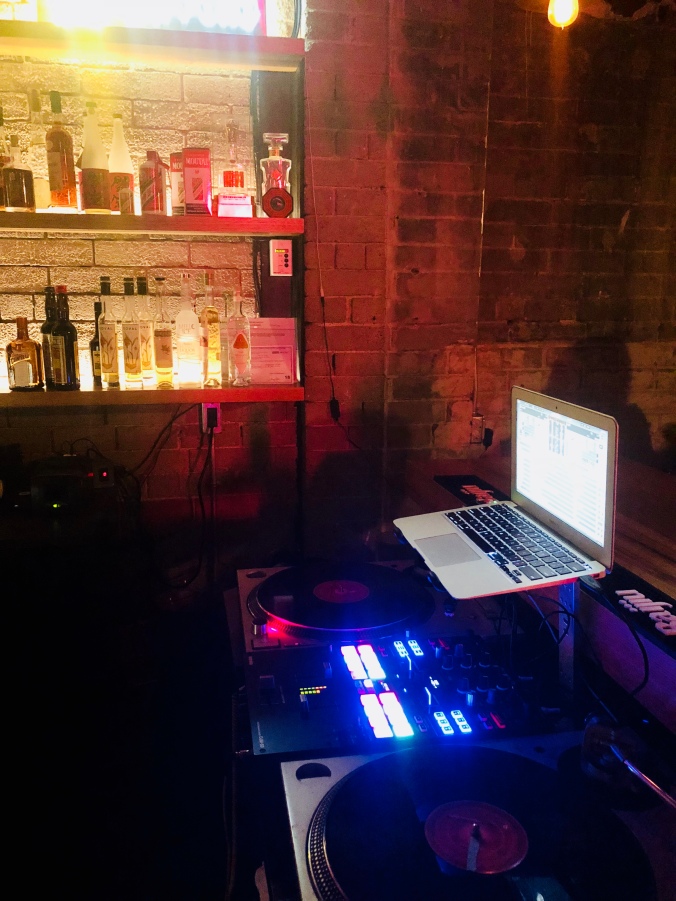 The DJ is a very transparent kind of guy. Either that or I just didn’t take a pic at the right time, ugh.

Astroboy looked upset about something. Too much booziness, AB?

Robert went all rogue and asked for a riff on something mezcal. Check out the Black Sea salt treatment!

I asked for something bubbly and French 75ish and St. Germainish and I got this little darling. 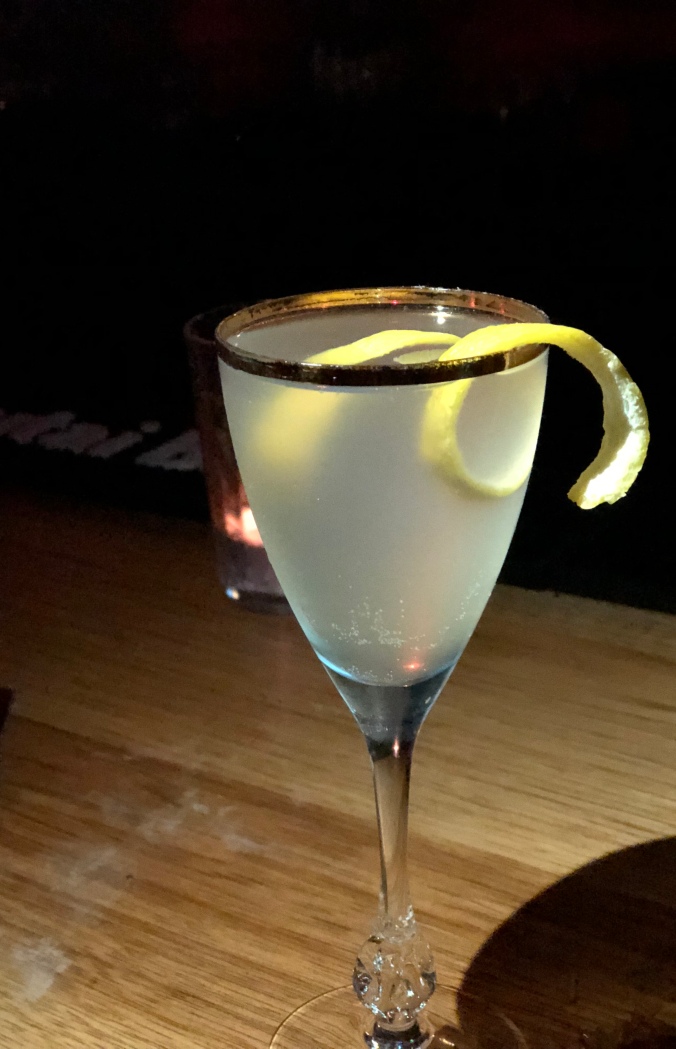 We tried out 3 dishes.

We had to try the infamous bao, of course, and went for the Red Braised Pork Bao. I couldn’t refuse the siren call of the Duck Confit Fried Rice and Robert wanted the Spicy Beef Noodles.

The food was. SO. GOOD. I had a small seizure when I tried my first bite of the rice. And those house-made fat noodles, GAH. Must come back for more when we are sufficiently famished and wearing stretchy pants.

Our knowledgable bartender revealed to us that they had discovered how to crack the Ginseng Royal Jelly bottle so that the contents would meld with the Japanese whiskey/Cynar/fresh ginger juice. Heck, this drink is pretty much the equivalent of a healthy superfood juice. Enjoy sans guilt, I say!

Before we left, we were served up the DJ’s pet drink – a shot of Hennessy VS followed by a teeny green tea. 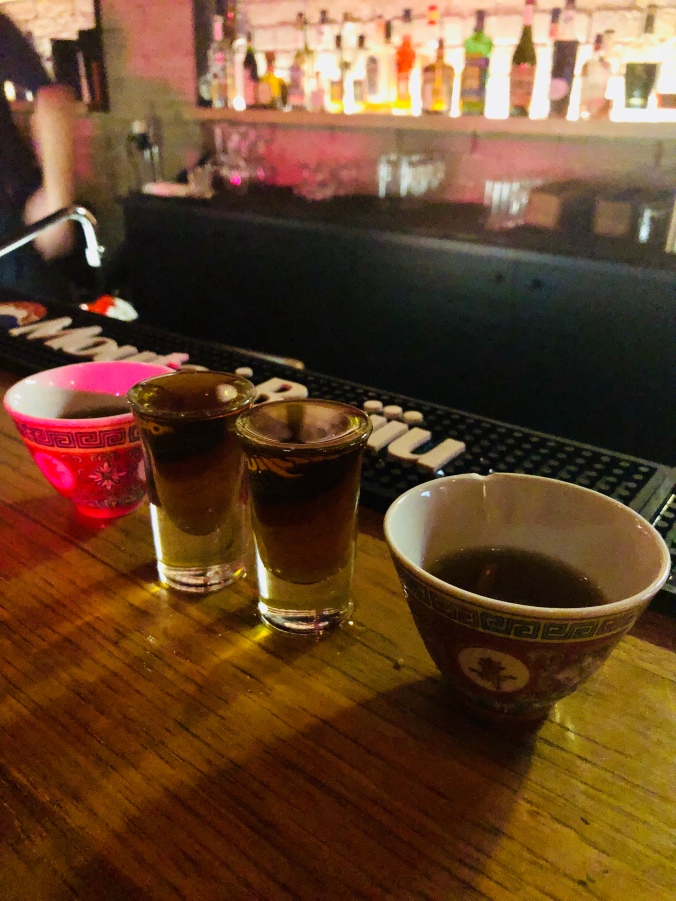 It was, much to my surprise, DELICIOUS.

Unfortunately, I think it caused Robert to have a mini stroke, as evidenced by his left eye.

Seriously, what is going on there???

If having involuntary nervous system reactions to delicious food and drink is wrong, I don’t ever want to be right!

Get thee to Baijiu!

Ah, New Year’s Eve, you kidder you. Always driving me into a frenetic mania in my attempt to secure the perfect NYE festivity. And every year, I tread dangerously close to disaster.

This year, I almost spent 200$ per person to sit in a stuffy, underwhelming ballroom at tables with 8 unknown Stepford wives/husbands, in chairs with fabric bows tied onto them, eating things that include descriptors such as “naughty” and “prestige” (BARF). Who do I think I am, a regular in the smash hit series, “Housewives of the Not-So-Wealthy-Side-Of Glenora”?? 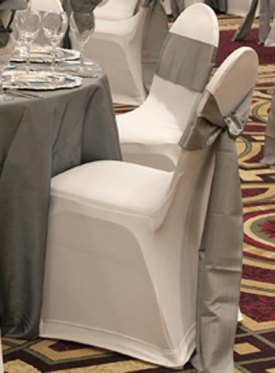 Rebounding from that near catastrophe, I went too far to the other extreme and almost spent 10$ to dance with children half my age whilst clutching my red solo cup of the dreaded vodka cran.

Fortunately, I was able to retrieve my senses from their precarious party planning perch, and ask myself:

Smart me: “Ok, soooo…what do we like to do when it’s not NYE, anyway?”

Smart me: “Alright! So here’s what we do. We eat good local food. We drink bubbles. Also, we eat Nibs.”

So off we went! First, we went to Table Top Café to eat Nibs. And play Bananagrams.

I love the candy bowls, I love running a tab, and I LOVE destroying the world with my banana gram talents.

Since we hadn’t made reservations, we decided to start at one of the best joints in town for food and for atmosphere, Bar Bricco. But first, a toast.

Have you been to Bar Bricco? I feel instantly cooler when I walk in there. 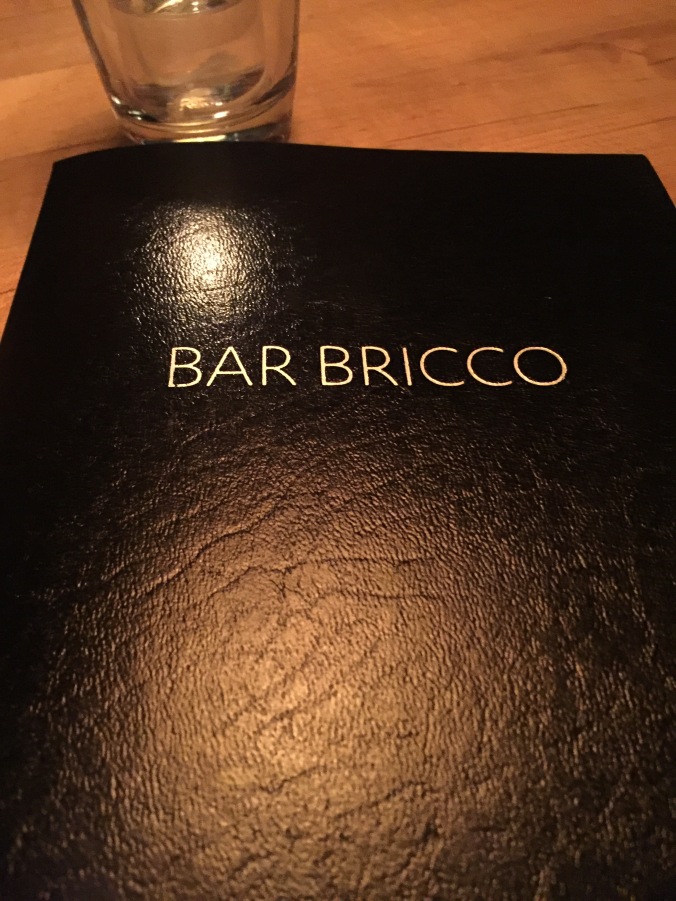 We started with the ricotta and crostini. Always a favourite, so to die for, and die we did. 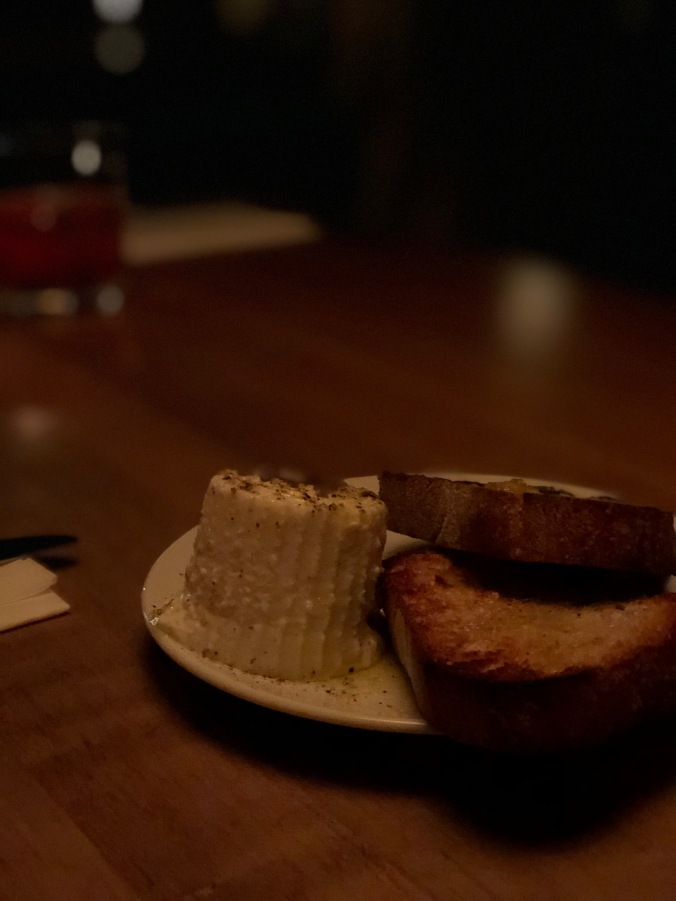 With a glass of the bubbly rosé – a Pinot Noir/Grasparossa, it was divineee. My compatriots enjoyed the 8$ Negronis and Boulevardiers. Man, I hang with some cool kids. 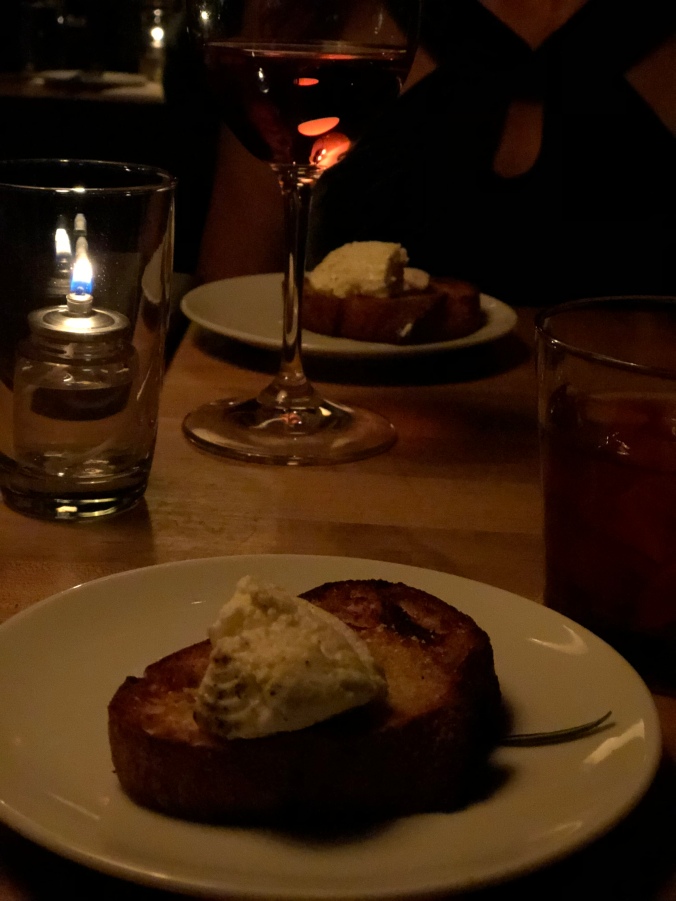 This was just the warm up though. If I had to marry a spuntini, my husband would definitely be the scrambled eggs Cacio e Pepe style.

Finally, the Fonduta Angolotti with its blissful sage butter.

Sorry for darkish pic. I’m actually surprised I have anything to show you since my eyes were closed in rapturous bliss for most of the dinner. Point and click, baby!

Time to move next door to Uccellino! Men in kilts first! 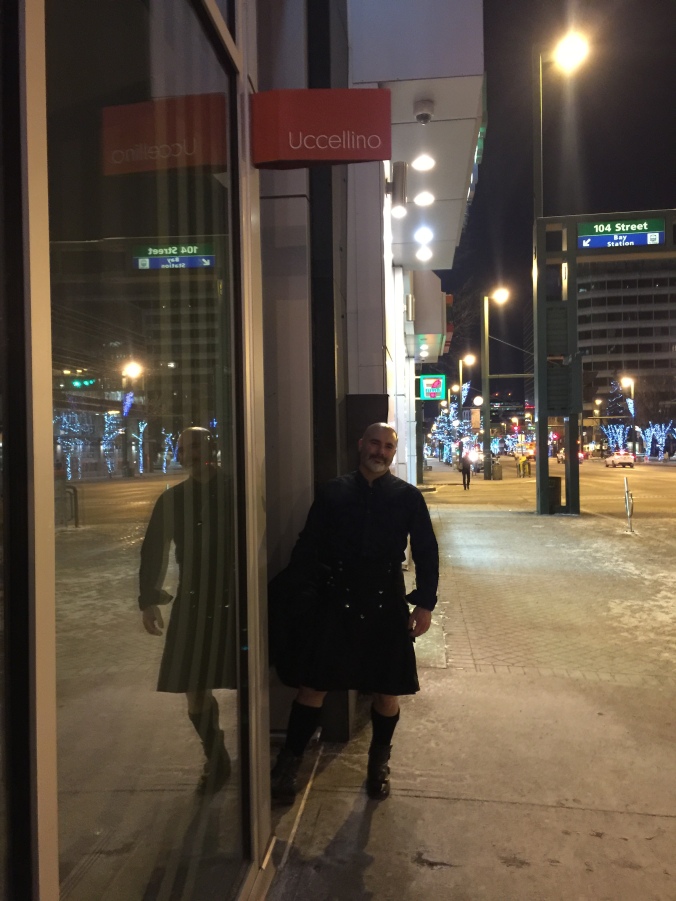 Oh my gosh I love me some Uccellino.

And get ordering ALL THE FOOD.

Pumpkin Agrodolce. Such a revelation of deliciousness. Like worthy of stopping in just to eat this beauty. 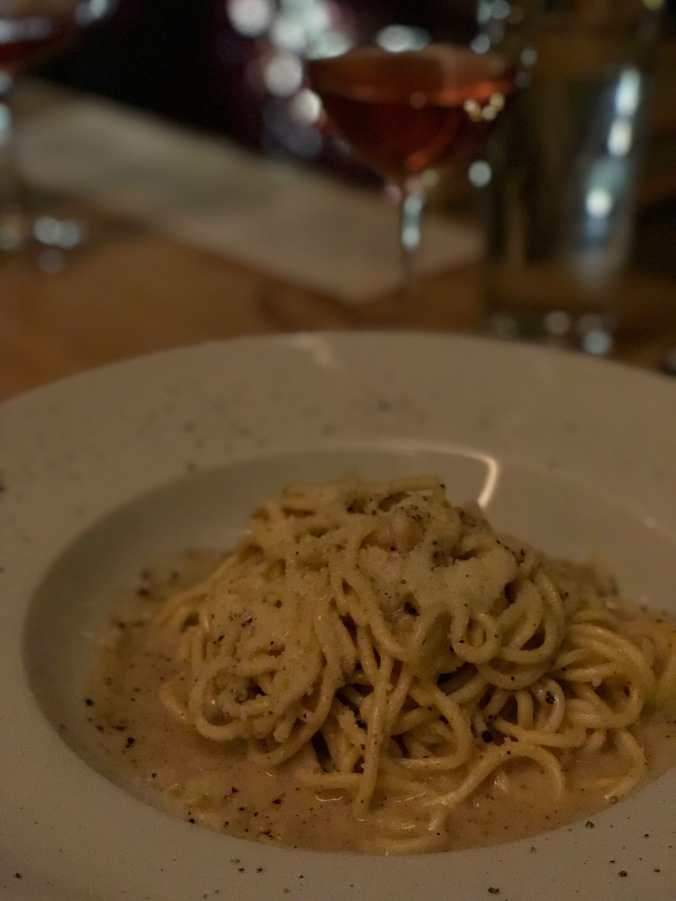 I, of course, had to continue my uninterrupted streak of Tonnarelli Cacio e Pepe. I always have intentions of breaking outside of the cheesy, peppery box, but continually fail.

Dear husband Robert has been holding a desperate and hopeful vigil for the Drunken Spaghetti for many months now. His soul was crushed like a pitiful ant under my Poppy Barley boot, however, when he heard it is still AWOL. He rallied and got the Pappardelle with Pig’s Head and Prosciutto Ragu Bianco. 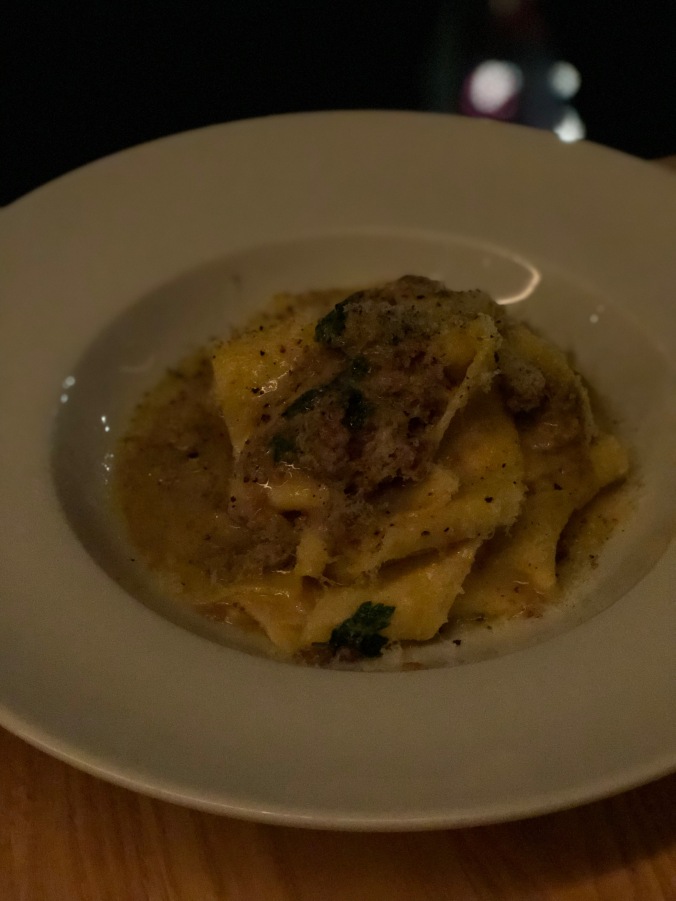 He did love it, of course! Nothing, however, will ever compare with his beloved Spaghetti Ubriacchi. For the sake of our marriage, Uccellino powers that be, please bring it back!

Dearest daughter o’ mine had the Pumpkin Ravioli.

More sage butterrrrrr. It was beloved, adored, and cherished.

Daughter’s lovely young fellow in rose had the Mezze Maniche. Spicy food for a spicy guy! 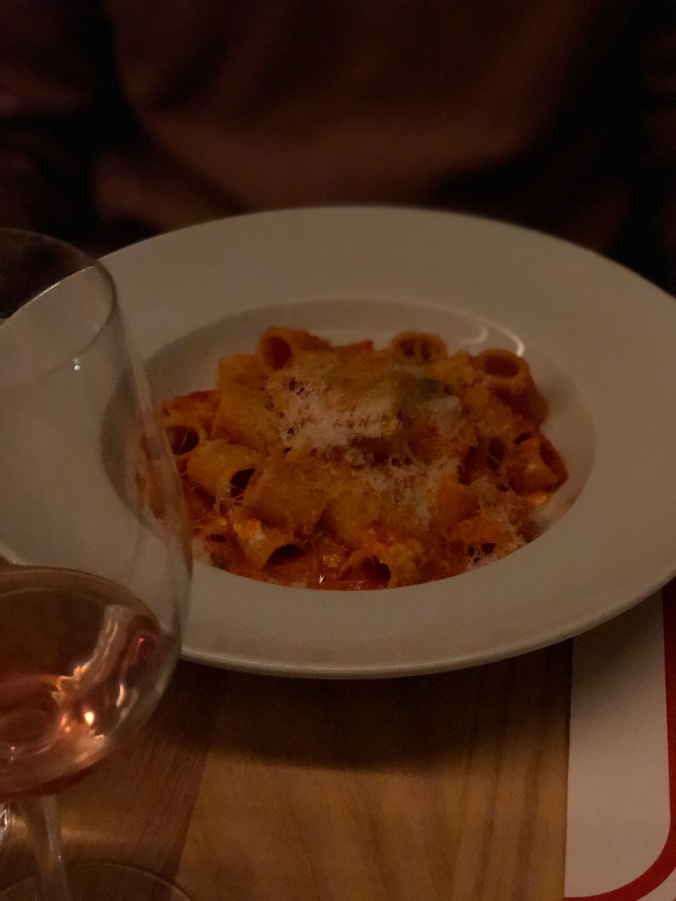 To end it all on a note of adulterated bliss, we had the olive oil cake with olive oil gelato. 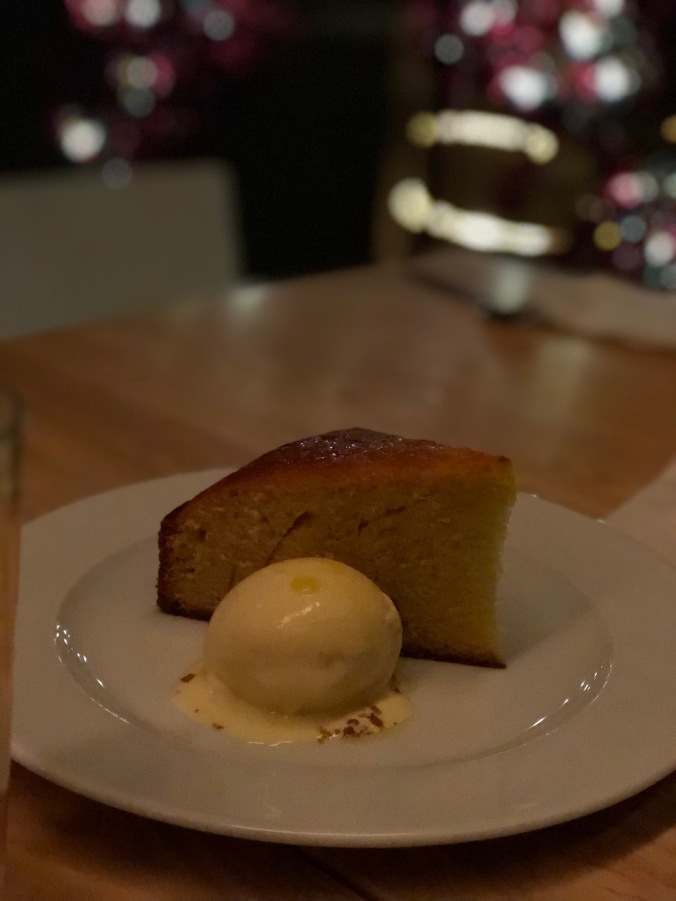 A toast to a highly successful NYE dinner!

P.S. I actually painted my nails so please note them.

What a delightful evening we have had, I guess it’s time to go hom-

WE DID NOT. HAVE. CHAMPAGNE.

I highly recommend Wishbone as a first date venue. That lighting though. Banishes the deepest of wrinkly crevasses into blurry oblivion!

Fresh, delicious, slurpy oysters with garlicky butter and lemon, of thee am I also fond. 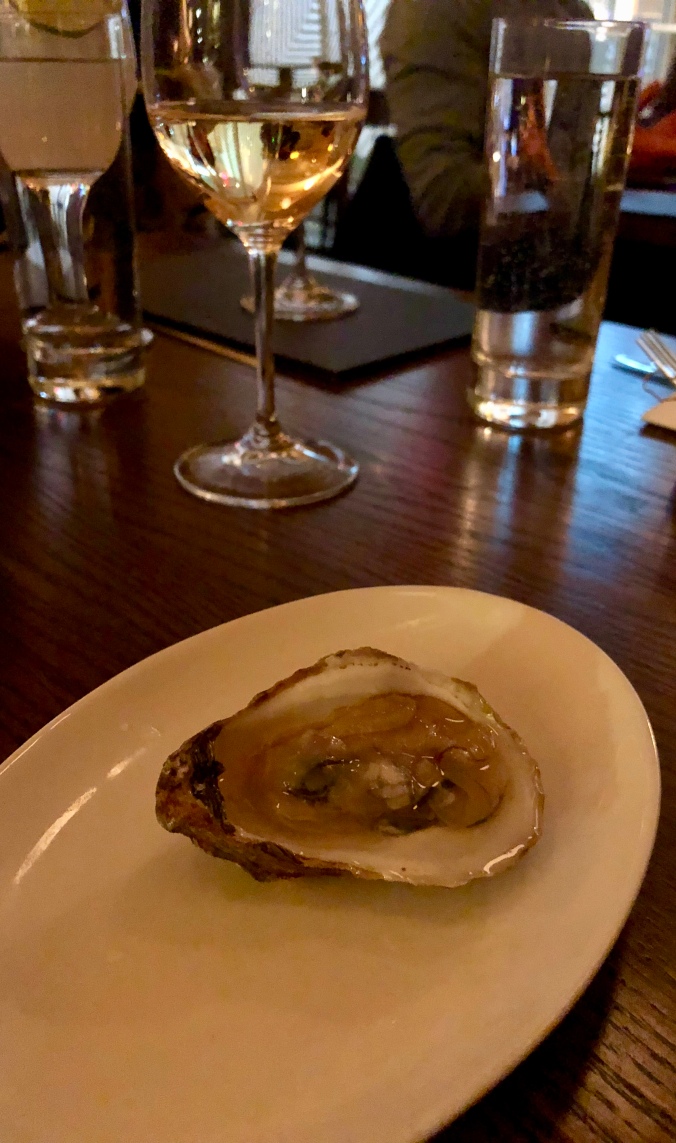 Fully sated with decadence and tomfoolery, we headed home.

How did you celebrate the new year? Hope it was anything but disastrous!

Still havent found what youre looking for

A Random Blog of Personal-Ness

Seen and Heard in Edmonton